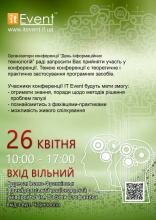 Add IT Event to calendar QR

IT Event aims to inform you about the possibilities of improving lives by simplifying the understanding of software tools, methods and features of the information, principles of project management and teamwork among IT and much more.

IT Event 2014 is already the sixth event of the series of international conferences IT Event held in Ivano-Frankivsk from 2010.